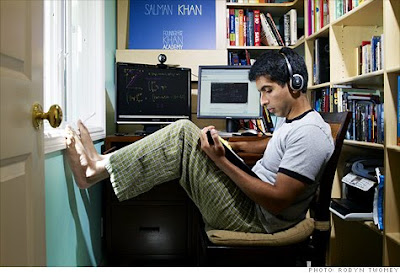 Khanacademy.org
FORTUNE -- Sal Khan, you can count Bill Gates as your newest fan. Gates is a voracious consumer of online education. This past spring a colleague at his small think tank, bgC3, e-mailed him about the nonprofit khanacademy.org, a vast digital trove of free mini-lectures all narrated by Khan, an ebullient, articulate Harvard MBA and former hedge fund manager. Gates replied within minutes. "This guy is amazing," he wrote. "It is awesome how much he has done with very little in the way of resources." Gates and his 11-year-old son, Rory, began soaking up videos, from algebra to biology. Then, several weeks ago, at the Aspen Ideas Festival in front of 2,000 people, Gates gave the 33-year-old Khan a shout-out that any entrepreneur would kill for. Ruminating on what he called the "mind-blowing misallocation" of resources away from education, Gates touted the "unbelievable" 10- to 15-minute Khan Academy tutorials "I've been using with my kids." With admiration and surprise, the world's second-richest person noted that Khan "was a hedge fund guy making lots of money." Now, Gates said, "I'd say we've moved about 160 IQ points from the hedge fund category to the teaching-many-people-in-a-leveraged-way category. It was a good day his wife let him quit his job." Khan wasn't even there -- he learned of Gates' praise through a YouTube video. "It was really cool," Khan says.

In an undistinguished ranch house off the main freeway of Silicon Valley, in a converted walk-in closet filled with a few hundred dollars' worth of video equipment and bookshelves and his toddler's red Elmo underfoot, is the epicenter of the educational earthquake that has captivated Gates and others. It is here that Salman Khan produces online lessons on math, science, and a range of other subjects that have made him a web sensation.

Khan Academy, with Khan as the only teacher, appears on YouTube and elsewhere and is by any measure the most popular educational site on the web. Khan's playlist of 1,630tutorials (at last count) are now seen an average of 70,000 times a day -- nearly double the student body at Harvard and Stanford combined. Since he began his tutorials in late 2006, Khan Academy has received 18 million page views worldwide, including from the Gates progeny. Most page views come from the U.S., followed by Canada, England, Australia, and India. In any given month, Khan says, he's reached about 200,000 students. "There's no reason it shouldn't be 20 million."

His low-tech, conversational tutorials -- Khan's face never appears, and viewers see only his unadorned step-by-step doodles and diagrams on an electronic blackboard -- are more than merely another example of viral media distributed at negligible cost to the universe. Khan Academy holds the promise of a virtual school: an educational transformation that de-emphasizes classrooms, campus and administrative infrastructure, and even brand-name instructors.

Quick, free, and easy to understand
Distance learning and correspondence courses have been around since the invention of mail. And private, for-profit schools flourish; the University of Phoenix has half a million students enrolled, most of them online. Other private operations, like the Teaching Co., specialize in amalgamating "great courses" from nationally known teachers: the 12-hour Game Theory in Life, Business, and Beyond, from one academic star, costs $254.95 on DVD.
What's remarkable about Khan Academy, aside from its nonpareil word of mouth and burgeoning growth, is that it's free and prizes brevity. Remember your mumbling macroeconomics teacher whose 50-minute monologue in a large auditorium could bore the dead? That isn't Khan. He rarely cracks wise -- if you want shtick, check out Darth Vader trying to teach Euclidean geometry on YouTube ("The Pythagorean theorem is your destiny!") -- but in less than 15 minutes Khan gets to the essence of the topics he's carved out.
Posted by Anupama at 3:02 PM

Children will not remember us for the material things we provided, but for the feeling that we cherished them. 1. Children are the world's most valuable resource and its best hope for the future.
2. The most effective kind of education is that a child should play amongst lovely things.

Whatever they grow up to be, they are still our children, and the one most important of all the things we can give to them is unconditional love. Not a love that depends on anything at all except that they are our children.

Children will not remember us for the material things you provided but for the feeling that we cherished them.
Posted by Anupama at 4:03 PM

Whatever you can do, or dream you can, begin it.. 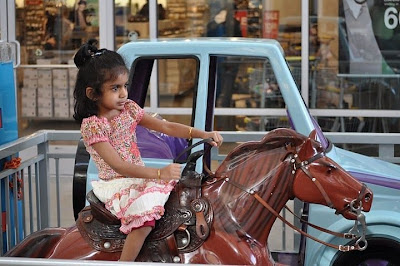 Until one is committed, There is hesitancy, the chance to draw back, Always ineffectiveness.

Whatever you can do, or dream you can, begin it. Boldness has genius, power, and magic in it.
Posted by Anupama at 2:40 PM

Labels: Sharing, Thought For the Day 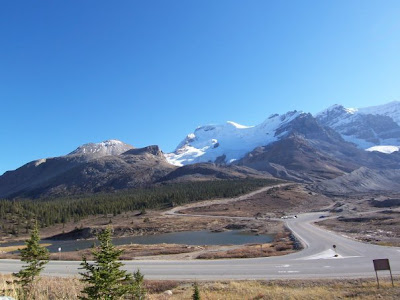 Vision takes the form of enthusiasm, commitment, pride, and the willingness to work hard and go the extra mile.

We can 'feel' the energy that emanates from vision almost from the moment we meet somebody who possesses it. This person's focus on his or her vision mobilizes not just physical resources but emotional and spiritual assets as well. Vision brings to life values, commitment, and aspirations."

Labels: Sharing, Thought For the Day