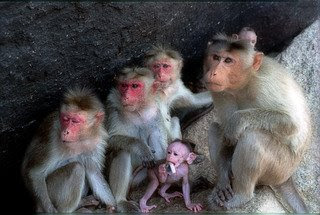 I am sure by now that most of you have heard the story about the scientific experiment conducted in the 1950’s with a bunch of Japense monkeys on an island in Koshima. The scientist would drop sweet potatoes in the sand for the monkeys, and while the monkeys loved the taste of the sweet potato; they did not like the taste of the sand. Yet, they ate them sand and all. Until one day, an 18 month old female monkey ventured away from the norm in her own little community, and started washing her sweet potato in a near by stream. She then taught this trick to her mother, who also began washing her sweet potatoes in the stream. She also taught this trick to her playmates, who in turn taught their mothers to wash their sweet potatoes the same way. Only the adults who were willing to imitate the new behavior of their children learned this social improvement. The rest continued to eat dirty sweet potatoes.

The most amazing thing that the scientists noted is that within a few years, almost all of the monkeys were washing their sweet potatoes before eating them. Not only that, but somehow, in a way we do not fully understand, since the awareness of so many monkeys on that island had shifted, the scientists discovered that the concept of washing sweet potatoes had jumped across the sea to another sect of monkeys who had never witnessed the behavior.

The scientists then noted, that when a certain critical number reach a new awareness, the awareness is somehow transferred “mind to mind.” Until that certain number is reached, the awareness remains the property of those within the group. To me, this is mind boggling, but also a message full of hope.

Considering all of the above, imagine what the world would eventually be like, if each person dared to stray from old thought patterns that no longer serve the whole of society well. Imagine if every person dared to think that my neighbor and myself are one and the same. Wouldn’t we embrace everyone? What if we no longer thought in terms of ”me and mine”, and realized that this also encompasses “you and your’s?” What if we began to understand that your pain is my pain, and your victories are my victories? What if we layed all selfishness and greed down? What if the critical mass number were reached and the idea began to spread across counties, across states, and across countries? Peace would prevail. War would become extinct. Poverty would end. Love would rule supreme.