My Experience at a Summer Camp- by Vikram Ruppa-Kasani 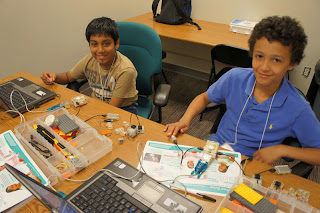 The ICE camp music and dancing with Pico Crickets and Scratch is one that I recommend to all rising middle school kids. In this camp we did a lot of crazy and at the same time cool stuff. For example in Pico Crickets we programed some Pico Cricket blocks to make a sound as we moved pickles. The farther the pickles were away from each other the higher sound they would make. In the camp we also created a lot of 2D games and animations in Scratch. Some of them were Pong, Football, a firework animation, and what I recreated for the parent presentations is Frogger. Not only did we learn about scratch and Pico Crickets, but we also learned about AR (augmented reality). AR is basically putting unreal things into reality. For example in camp they showed us a video of high-tech Google glasses that use AR, when people put them on all they have to do is speak and the glasses will play a song or call someone. And in the corner of the screen it shows what it’s doing, and that how it augments your reality. In this camp they also show you a bunch of cool AR games on IPhone like AR basketball, Nerd herder, and an avenger’s game. Overall this camp was a very exciting and educational experience that kids of all kinds would enjoy. And as I said before I recommend this camp to all rising middle school kids. I would like thank FCSG for providing me the scholarship for my summer camp.
Posted by Anupama at 1:25 PM