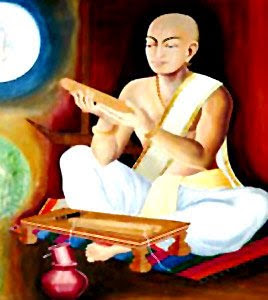 Potana was one of the greatest Telugu poets of the 15th century. His full name was Bammera Potana. Potana and his parents Kesanna and Lakshmamma lived in Bammera, Warangal in the state of Andhra Pradesh. Potana was an agriculturist by occupation and very polite by nature and he never hesitated to work as a farmer.

At a very young age Potana composed ‘Bhogini Dandakamu’ a poem in praise of King Singa Bhoopal’s concubine Bhogini. The second composition of Potana was ‘Virabhadra Vijayam’ which explains the adventures of Virabhdra son of Lord Shiva. He also translated Vyasa Sanskrit Bhagavatham into Telugu and dedicated to Rama. He kept himself away from the courts of the kings and led a very simple life.
Posted by Anupama at 10:45 AM