In Loving Memory of RV Poornachary 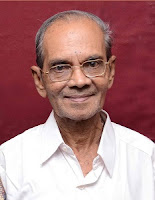 My date of birth is April 2, 1931. I was born in Madurai. My father’s name is R P Venkatrama. He was doing sarees business. He expired during my childhood when I was studying 7th standard. Afterwards, my mother had taken care of me and other two brothers. I had completed my Secondary School Certificate in the year 1950. And studied Intermediate in the Thiagarayar College in Madras. I completed my B. Com Degree in Madurai College of Madurai.

1953 is the centenary year of Railways in India. I took ‘travel as you like’ trip along with my college friends for 15 days at the rate of Rupees 50/- per head. That trip was an unforgettable one for me. We first went to Tirupapthi, then Bangalore, and afterwards Bombay, Pune and then returned to our home town, Madras.

I married Navamani in the year 1963. In the year 1956, I came to Madras and entered the Secretariat service and retired as a Section Officer from the Information and Tourism Department of Secretariat, Madras. During the course of my service, I had been allotted a house plot in Periyar Nagar. I had constructed a small house in the year 1983 out of Government loan. Afterwards I had expanded the house.

My second son is Gangadharan. He has done B E in Mechanical Engineering. He had been working as a production Engineer in Sumeet Mixie CO, for the past 12 years. Now he had left that job and joined in a new company as a quality assurance engineer in Play Flex Co, which supplies foam. He married Anandhi in the year 1998, who is a B COM graduate. He has got one daughter, named Vaishnavi.