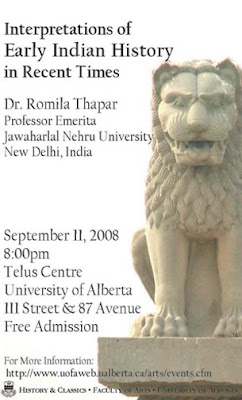 Ashok and I attended Romila's lecture in University of Alberta. I met a couple of professors from University of Hyderabad, who attended the lecture. One is from the Chemistry department. I told him about akkaiah.

Romila is 78 years old, but active. She spoke for a couple of hours, standing tall. I met Raj Pannu and his wife. And I introduced Ashok to them. I could meet Ashok's supervisor also. He spoke nicely. Ashok introduced me to him.

With Love, Nana About Romila Thapar

Thapar is professor emeritus of Ancient Indian History at Jawaharlal Nehru University in Delhi, also author of many seminal works on the history of ancient India.

In January 2005, Romila Thapar refused to accept the Padma Bhushan awarded by the Indian Government.

She exclaimed her reason for turning down the award as:

"I only accept awards from academic institutions or those associated with my professional work, and not state awards."