An interesting LIFE for you to read: The story Hypatia of Alexandria, Egypt. 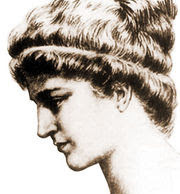 Hypatia is credited with saying. "To teach superstitions as truth is a most terrible thing."
Dear Children , Good Morning!
Hypatia was born in the year 370 AD.

The life of Hypatia was one enriched with a passion for knowledge. Hypatia was the daughter of Theon, who was considered one of the most educated men in Alexandria, Egypt. Theon raised Hypatia in a world of education. Most historians now recognize Hypatia not only as a mathematician and scientist, but also as a philosopher.

Throughout her childhood, Theon raised Hypatia in an environment of thought. Historians believe that Theon tried to raise her the perfect human. Theon himself was a well known scholar and a professor of mathematics at the University of Alexandria.

Theon and Hypatia formed a strong bond as he taught Hypatia his own knowledge and shared his passion in the search for answers to the unknown. As Hypatia grew older, she began to develop an enthusiasm for mathematics and the sciences. Most historians believe that Hypatia surpassed her father's knowledge at a young age.

In her education, Theon instructed Hypatia on the different religions of the world
and taught her how to influence people with the power of words. He taught her the fundamentals of teaching, so that Hypatia became a profound orator.

People from other cities came to study and learn from her. Hypatia's life ended tragically, however her life's work remained. Later, Descartes, Newton, and Leibniz expanded on her work. Hypatia made extraordinary accomplishments for a woman in her time. Philosophers considered her a woman of great knowledge and an excellent teacher.
With Love, Amma-Naana
Think only of the best, to work only for the best, and expect only the best.
Posted by Anupama at 1:36 PM