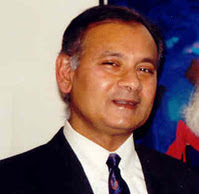 "He's hard-working, he has integrity and he works well with people."

He is active in several community organizations including the South Asian Fellowship, the National Association of Canadians of Origins in India and South Asians Fighting Against Racism. Alok is frequently called upon to speak and write on human rights, employment equity and anti-racist education issues.

Alok Mukherjee is a consultant, trainer, researcher and writer in equity, human rights, organization change and organization development. As well, he teaches about South Asian culture and society at York University. Until recently, Dr. Mukherjee was the Vice Chair of the Toronto Police Services Board, the first South Asian to be elected to this position. Since mid-October 2005, he has been appointed as the Chair of this Board.
Among Dr. Mukherjee’s many publications are: Towards an Aesthetic of Dalit Literature: History, Controversies, Considerations (2004), Kaleidoscopic Organizations: Diversity and Inclusivity (2001), Employment Equity for Racially Visible and Aboriginal Peoples (1995), and Anti-Racist Education: Selected Readings and Resources (1993).
Dr. Mukherjee has held several public appointments, including:
· Member, the Toronto District School Board Safe and Compassionate School Taskforce,
· Member, Transitional Advisory Group to assist Toronto Mayor David Miller in assuming leadership of Canada’s fifth largest government,
· Member, Ontario Civilian Commission on Police Services, and
· Vice Chair and Acting Chief Commissioner, Ontario Human Rights Commission.
Dr. Mukherjee plays an active role in the community. His volunteer activities have included:
· Chair, Council of Agencies Serving South Asians (CASSA), Toronto,
· Member, Board of Governors, Centennial College of Applied Arts and Technology, Scarborough,
· President, Indian Immigrant Aid Services, Toronto,
· Chair, Housing Sub-Committee, Social Issues Committee of the Children's Aid Society of Metro Toronto,
· Chair, Sub-Committee on Access to Services, City of Toronto Mayor's Committee on Community and Race Relations, and Member, Multiculturalism Committee, United Way of Greater Toronto.
For his leadership role, he has received the Ontario Volunteer Service Award (1996), the Molson New Pioneers Award for Leadership awarded by Skills for Change, Toronto (1996) and Commendation by the Mayor of Toronto (1987).
Posted by Anupama at 3:13 PM