Here is a summery of brief lecture of MUHAMMAD YUNUS, a winner of 2006 Nobel Peace Prize. 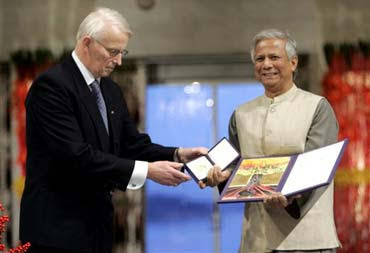 We get what we want, or what we don't refuse.

If we firmly believe that poverty is unacceptable to us, and that it should not belong to a civilized society, we would have built appropriate institutions and policies to create a poverty-free world.

World's income distribution gives a very telling story. 94 percent of the world income goes to 40 percent of the population while 60 percent of people live on only 6 per cent of world income. Half of the world population lives on two dollars a day. Over one billion people live on less than a dollar a day. This is no formula for peace. I believe terrorism can not be won over by military action. Poverty is Denial of All Human Rights. Poverty is the absence of all human rights. The frustrations, hostility and anger generated by poverty cannot sustain peace in any society.