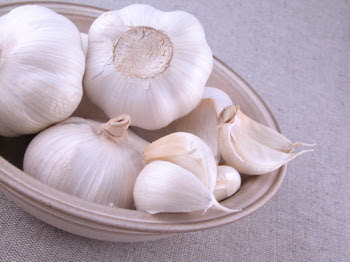 Dear Children,
Good Evening. How are you? How is our sweet Pragathi? We are all fine here. I would like to write about GARLIC in this e-mail.

Garlic, a member of the lily family with its distinctive odor and taste, has been used throughout recorded history because it was considered to have beneficial properties. The earliest known records are from 3,000 B.C.

It was used as a medicine in Ancient Egypt, where it was used to cure 22 different ailments. It was also fed to the slaves who were building the pyramids because the Egyptians believed that, in addition to keeping the slaves healthy so that they could continue to work, garlic would make the slaves stronger so that they could work harder.
The ancient Greeks and Romans found even more uses for garlic then the Egyptians had. In addition to using garlic to cure illnesses, as the Egyptians had, the Greeks and Romans believed that garlic had magical powers that it could ward off evil spells and curses. Garlic was also fed to soldiers because it was believed to make men more courageous.

Quite a few seafaring cultures have also used garlic because they believed that it was beneficial in helping sailors to endure long voyages. Homer used it on his odysseys, the Vikings always carried garlic on their long voyages in the northern seas, and Marco polo left records showing that garlic was carried on his voyages to the Orient.

Finally, even as late as early in the twentieth century, it was believed that garlic could fight infections. Because of this belief, garlic juice was applied to soldiers’ wounds in World War 1 to keep infection at bay and to prevent gangrene.
Usage Tips
The distinctive flavor of garlic is released in varying intensities depending on how it is prepared and used in recipes. The more the cloves are chopped or crushed, the more juices and essential oils they release. For the mildest flavor, use garlic in whole cloves or large slices. For medium to full flavor, chop or mince even smaller. And for full-on garlic intensity, smash, purée or press the cloves with a garlic press to release a profusion of juices and oils.

• To quickly peel garlic, place the flat side of a chef's knife on top of the clove and whack it with your fist to loosen the skin.

• For a little garlic flavor in your salad, cut a clove in half and rub the cut eges along the inside of your bowl.

• For the best flavor, add garlic to dishes during the last few minutes of cooking (over-browning turns it bitter).

• If a recipe turns out too garlicky, a touch of honey will balance the flavor.

• To remove garlic odor from your hands, rub them on a stainless steel spoon or faucet, then wash with soap and water

More in my e-mail tomorrow
With love, Amma-Nana
Posted by Anupama at 7:23 PM