My Meet with Mr.Terry Cavanagh

I just came to the Library from City Hall. I associated one hour and fifteen minutes with Mr. Terry Cavanagh. I reached the city hall quite ahead of my appointment time. I was the second visitor at his office today.

He greeted me folding his two hands - "NAMASTHE". And he asked whether I can have a cup of tea. I told first about me and our family. Then I gave him a couple of papers with more than 50 questions.

He answered all the questions with great patience and pleasure. He was a great Hockey Player and played in different cities of Canada. His first son is now 58 years. He is 80 years old. But very active.

He told that he sleeps for 8 hours a day. And the rest of the time he works or attends his duties. He hopes to live longer.

Finally I gave him a paper to make a circle 5 words that describe his personality.

He in his own words, Friendly, Enthusiastic, Good- natured,trustworthy and Honest.

He says that all people are good and some are just better than others.

He also tells that his children and any children must always know the right from the wrong. And the lord helps those who help themselves.

He gave couple of greeting cards signed by him to post for you. He wrote on it that "It was a great pleasure meeting your father.'

More in my next mail, Have a good day, dear all
With love, Naana

Note: -- He told me, that my signature tells any that I am a humanist. 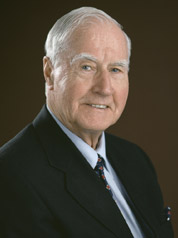 Born in Edmonton, he was first elected to Edmonton City Council in 1971, and served until 1975 when he was elected mayor by Council after the death of Mayor William Hawrelak.

Cavanagh was mayor from 1975 until 1977, then served again as a councilor from 1983 to 1988. He served a second term as mayor from 1988 until 1989 when Laurence Decore resigned to lead the Alberta Liberal Party (again, elected by Council), and in 1992 he was once again elected councilor. He currently represents Ward 6.

He was the first native-born mayor of Edmonton.
Posted by Anupama at 3:54 PM